Today was a full day. We took our tour of the DMZ (Demilitarized Zone). This is a buffer zone between North and South Korea. I had no idea how tense the tour was going to be. There's a line that separates North & South Korea. I believe it's called the line of demarcation. There's a buffer zone that extends 2 kilometers out on both sides of the line. This is the DMZ. It's to prevent either side taunting or messing with the other. When we started the tour, we had to sign a waiver that started something like this: "...you are willingly entering a hostile zone, and understand that injury or death may result..." It was at that point that I wondered if I was crazy. We made several stops on our DMZ tour.

This is a small museum that we saw at the beginning. As you can see, part of the floor was glass that showed models of the border, look out posts, and tunnels. South Korea has discovered 4 tunnels that the North has dug in hopes of attacking, and we got to walk down into one. It was pretty cool. I'm guess they're trying to dig under the city because South Korea has several rounds of defense set up, such as: a tall fence along the border lined with razor wire, then and area behind the razor wire fence that contains somewhere between 1.4 and 2.4 million mines, and finally a tank proof wall. They are pretty serious about keeping N. Korea out! 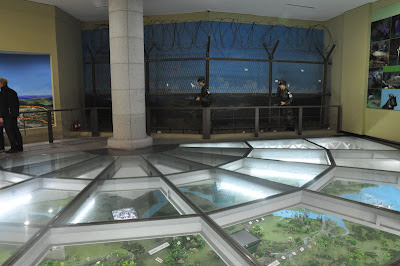 This is at a lookout to see into N. Korea. As you can see behind us, it was extremely foggy & raining, so you couldn't see much. Also, you had to stand behind a line painted on the ground to take pics. 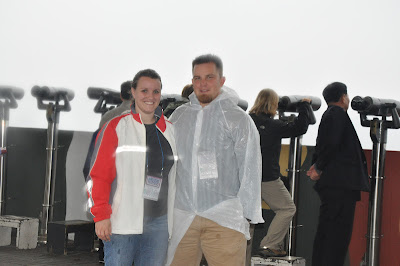 This was another stop. A train station that at one time went from North to South Korea. It no long travels into the North. This was the northern most stop. However, they did say that there are some businesses that work together between the North & South. 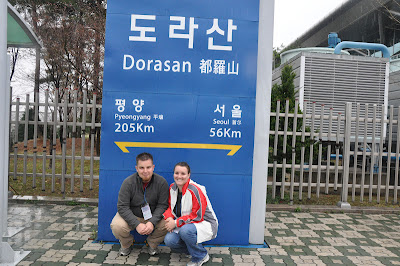 Micah & his brother Brandon near the tracks. A train pulled up shortly after. 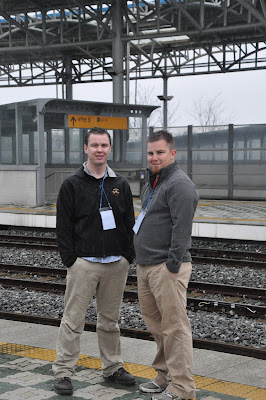 This is inside the JSA (Joint Security Area). This is where all the negotiations go down between the North & the South. The border goes right down the middle of the table. We actually stepped into North Korea. 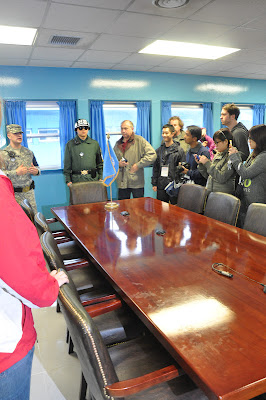 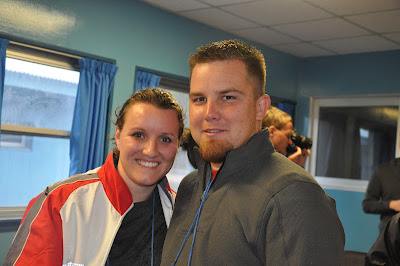 This building is in North Korea. You can't see him, but there's a guard standing at the top of the building, and one watching out one of the windows. The guards you see are South Korean guards. 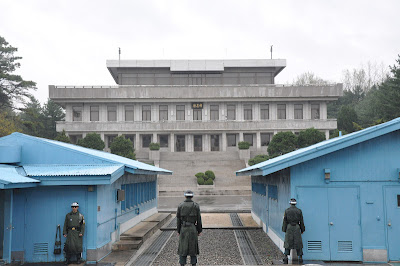 This is a little "village" in N. Korea. They call it propaganda village. The North tries to convince Southern Koreans to move here. They say it's a fancy place to live. However, it's an empty, "fake" village just used to draw people into the North. We heard some very interesting stories! 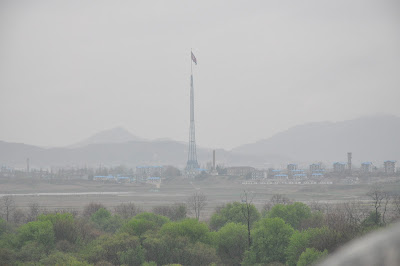 And at the end of the tour, we had a traditional Korean meal. It consisted of beef, rice, sausage, some macaroni looking something, and various other foods that we were quite sure of. It was all pretty good! 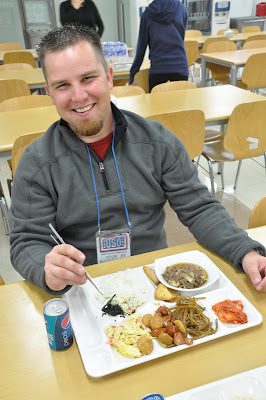 It was an intense day! But, I enjoyed it. I was hesitant to go, but I'm glad I did!! Once we made it back to the apartment, we just relaxed for the night!

Posted by Micah and Nicole at 6:04 PM