I feel like I'm getting later, and later at writing his monthly blogs. I'm not sure what my deal is! And it doesn't help that K is not at all cooperative during our photo shoots!! He's all over the place and doesn't care that I need some good pics!!! 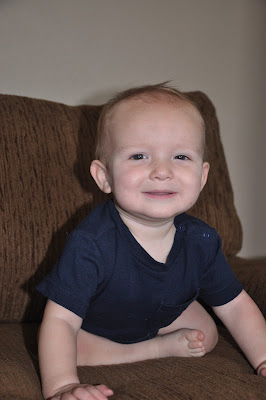 Stats:
I took Kaden to the Dr. right around his 10 month birthday. He had a cold, and a double ear infection. He weighed in at 19 lbs, 4 oz. When I took him back yesterday for a re-check, he was 19 lbs, 8 oz. Growing every day! 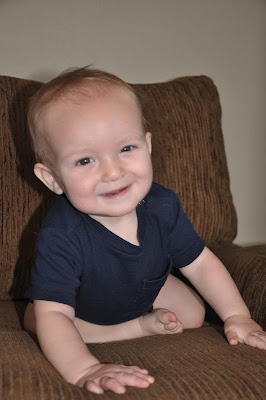 Sleeping Habits:
Kaden is doing MUCH better in the sleeping department. He sleeps through the night now. Finally!! Usually 8-10 hours! He usually wakes up between 6:30-7:30, but after he nurses he goes back to sleep for a couple hours. He's also doing better at nap time. 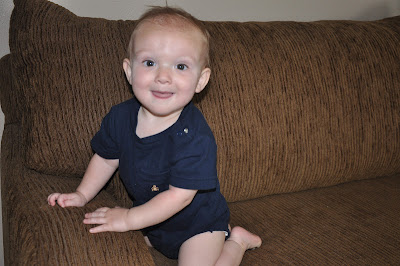 Eating Habits:
If Kaden likes anything, he likes to eat! He LOVES fruits. All kinds...blue berries, bananas, strawberries, kiwi, blackberries, watermelon, oranges. He's not picky when it comes to fruit. We've also discovered recently that he loves chicken. His favorite foods are probably crackers, bananas, blue berries, and carrots. He's also been drinking a lot of juice, and we're planning to introduce milk soon. 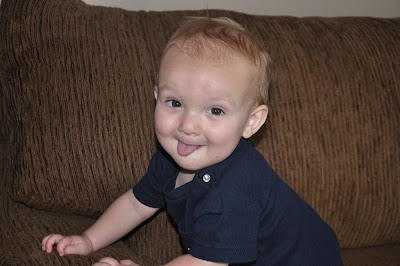 New Tricks:
Kaden has found his tongue. You'll notice in most of the pics, his tongue is sticking out. That's how he looks these days. He just chews on it. I think it's a combo of him discovering his tongue, and teething. His newest word is mama. He'll crawl to me, raise his hands, and say mama. Melts my heart! He can give high fives too! I'm trying to work with him on baby sign language, but neither of us are very good at it. 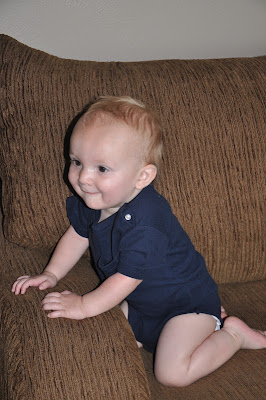 Dr. Visits:
I had to take Kaden to the Dr. right before his 10 month b-day. He had a yucky cough, runny nose, and double ear infection. He was on antibiotics for about 2 weeks to clear up the ear infections. I really hope that this doesn't become a reoccurring thing. 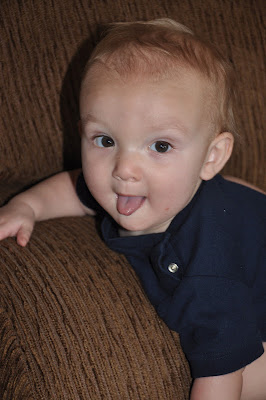 General Observations:
Kaden will be walking before we know it. He already gets brave and tries to stand on his own. He has stood for a couple seconds at a time, but he usually gets excited and falls. It's amazing how fast time flies when you're having fun!!! 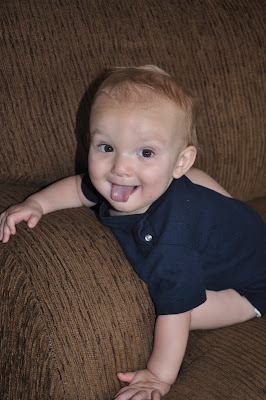 Posted by Micah and Nicole at 1:00 PM

I take Pearson's pictures when Matt is home or when my Mom can come over and help. It gives him something to look at and smile at and it also give me an extra set of hand when he tries to fly out of the chair!! I'm sure you know what I mean!!

I'm a little jealous he is saying MAMA. I can't wait for Pearson to say it. He says Dada all the time, but I still don't think he knows who Dada is.

Are you still nursing? If so are you going to go straight from nursing to whole milk or are you going to do formula in between. I haven't really looked into all of that transition, but Pearson might be trying to wean. The two feedings in the middle of the day are getting a little difficult. I'm going to try to hold on to all of them for a year, but we might just be able to do the morning and bedtime nursings until a year. We'll see.