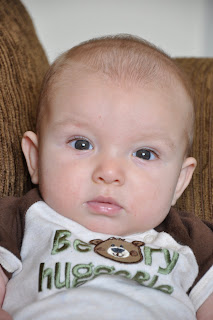 So, I'm a little behind on the 5 month post. It may or may not be because I had a little bit of trouble getting my sweet boy to cooperate taking pics. Apparently 5 month olds don't like to sit still to have their picture made. It's not fun! You can tell by looking at his face in the above pic...blank stare! 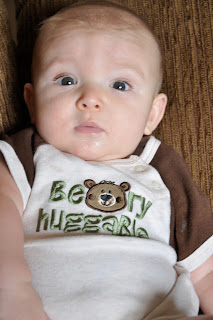 Also, you'll notice the cute little magnet board with "5 months" only made an appearance in a couple of pictures. That's because he was more concerned with eating it! I'm not sure how healthy it is to chew on magnets. So, we had to try a couple of different times, in a couple of different locations. Oh well...now you know a little better how it is dealing with a 5 month old all day. They're really squirmy!! 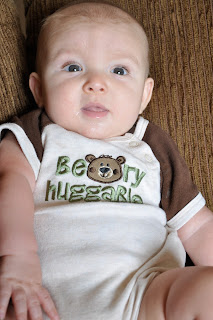 Stats:
At our last check-up, he was 15lbs 1oz and 25in long. We go back again at 6 months, so we'll have more official stats. Our last home weigh-in put him at close to 16 pounds. 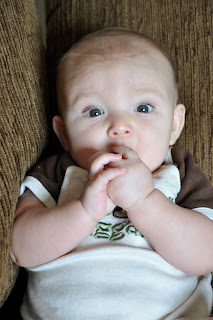 Sleeping Habits:
Sleep?? What's that?? The past month has not been so great. Kaden is back to waking up once in the middle of the night. Not sure what that's about. Dr said he's probably hitting a growth spurt. My thoughts are he better grow quickly! Sometimes a simple pat or paci will work, but sometimes he actually wants to nurse. Hopefully he'll grow out of this stage quick! It doesn't really bother me too much since I get to be home with him all day and can nap if I need to. I know they're only this age once, so I try to enjoy ALL of it...the good & the not so good! :-) On a better note, he's taking longer naps now, which is nice. Before, he'd only sleep 30-45 min. Now, he'll nap for an hour or two. We can tell when he's tired cause he'll rub his eyes, bury his face (in my arm pit, neck, anywhere to hide it from light), and then his hand goes in my mouth. Not sure what that's about. I haven't figured out how me sucking his thumb or finger makes him feel better, but it does. Kids are so weird! ;-) 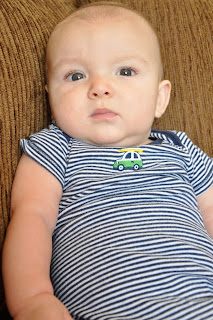 Eating Habits:
This has been the biggest area of change in Kaden's world. We've started baby food. At first, when we tried plain cereal, I wasn't sure how well it was going to go over, or how easy it would be. I had heard breast-fed babies are sometimes hard to introduce anything other than mommy to. But, once I started introducing fruits & veggies, he's loved it. So far we've tried carrots, green beans, sweet potatoes, apples, bananas, squash, peas & peaches. The squash and peas haven't gone over to well, but we'll keep trying! I usually feed him half a jar of fruit with cereal in the morning, half a jar of fruit/veggie with cereal in the afternoon, and a veggie with cereal at night. He's a very flexible eater. He always has been. I still nurse him at all meals as well. 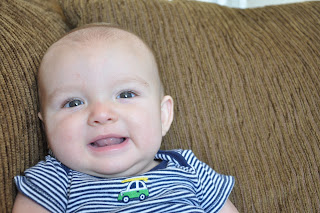 New Tricks:
Kaden is quite the "talker." It's so cute to listen to him make new noises. He can tell when he's making a new noise, and he'll "practice" over & over. He's also on the move. He hasn't mastered crawling, but he uses rolling to get where he needs to go. If he sees a toy, or anything he wants, he'll roll or inchworm until he gets there. He gets his legs up under him, but he hasn't figured out how to use his arms and legs to get where he needs to go. It won't be long! 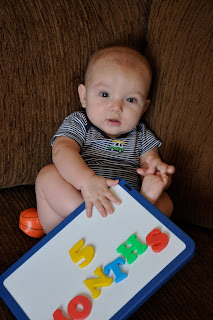 Dr. Visits:
We went to the Dr. for his 4 month check-up. He's growing right on track. Dr. says we couldn't ask for a more perfect, healthy baby. We're very blessed! We go back in 1 month for his 6 month check-up. 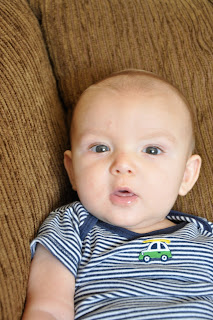 General Observations:
Every month I write about how he's entering the "fun stage." Well, he's there! We love this kid! He's so full of energy, and has the cutest personality. He loves to laugh. The silliest things make him laugh out loud...silly faces, silly voices...it doesn't take much. He interacts with us more. He recognizes familiar faces. He's getting to the age where is doesn't like anything that confines him...carseat, bouncy seat, bumbo. He wants to be able to move around. He's so squirmy. He likes to be held standing up, so he can jump up and down. We had music on the other night & he was jumping and dancing. He's so fun, we just can't get enough of him! 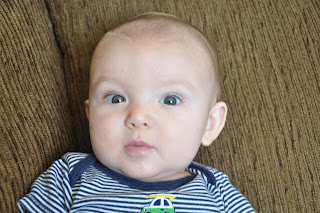 The months are flying by. Especially this time of year. I love the holiday season, but it always goes so fast. There's so much to do, and so little time! We wake up every day wondering how our little guy is going to change, what new tricks he'll do, how much bigger he'll be, or how he'll surprise us! 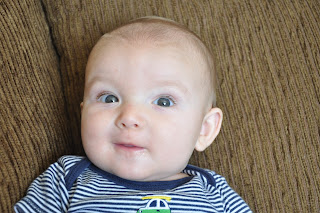 For a not so great "photo shoot", I couldn't pick just a few pics. With a face like this, there's too many good ones! :-) 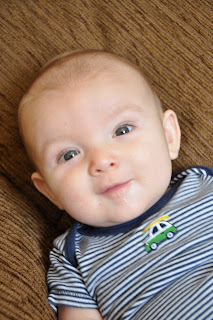 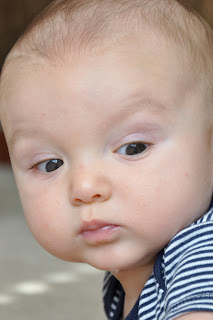 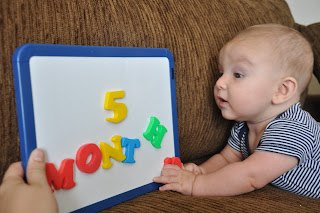 Posted by Micah and Nicole at 8:43 PM