The last time Micah's parents were in town, they bought this little basketball net for K. He loves "baketball." Although at first I'll admit I wasn't sure about our new kitchen decor, it has come in pretty handy. *Most* nights it keep K out from under my feet while I'm trying to cook dinner. And we've had several family games of "baketball." K was really good at shooting the ball, until his daddy adjusted the height of the net, now it's thrown his game off. But we still have fun playing. 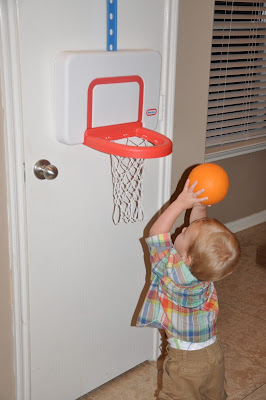 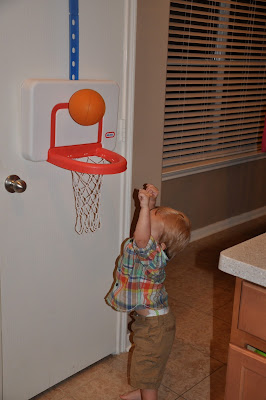 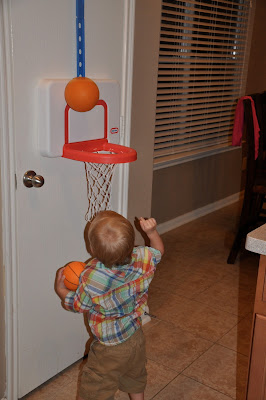 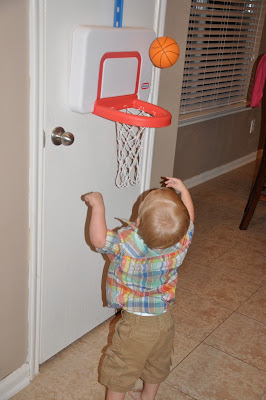 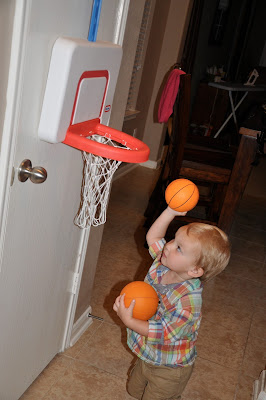 So, while it's not exactly the decor I was looking at putting on the pantry door, it is definitely "Kaden Approved!" (And I'm pretty sure it's daddy approved too! :) And you know us mommies, if our kids are happy, we're happy too!

Posted by Micah and Nicole at 2:10 PM 1 comments

If you know us at all, you know that our little guy has a love for all things trains!
This in no knew news.
Our little town has a small train museum. I wasn't sure that there would be anything that K would be old enough to appreciate, other than just looking at the two rail cars they have...which turned out to be enough! I went with hopes of getting a good picture of him for his birthday party invites.
We're having a train themed party..Surprise!
I wasn't able to get the pics I hoped because we couldn't just freely walk around the area. It was a guided tour. However, we were the only people there, and the little, old man that gave us the tour loved K & loved watching him explore & shout "train" every time he saw one!

So, I did get some good pics.
Our guide let K ring the bell...repeatedly!! 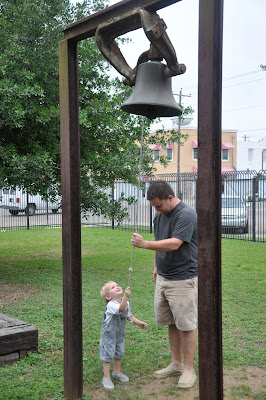 We walked into both rail cars. This is a conductor's chair. Little boy thought he was big stuff, and we had to bribe him to get him down! 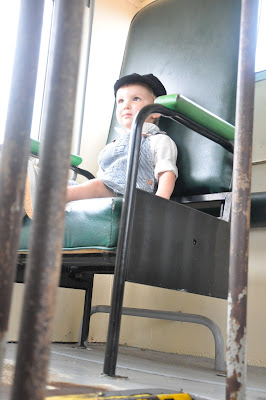 "Train! Mama, train! Train, Mama!" This is what I heard the whole tour! 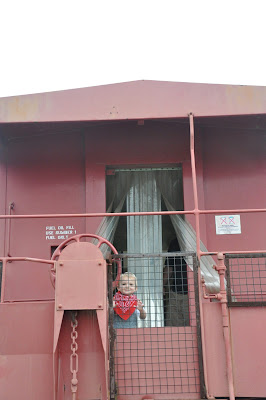 Cutest little conductor I know! The guide asked me where I got his "conductor" outfit. When I told him I got the overalls at Khols, he looked at me a little strange. :) 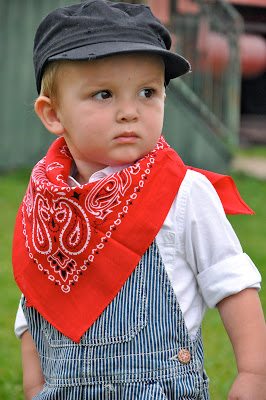 This was in an original tower that was over 100 years old. All those switches controlled the tracks. The guide let K push/pull them, and then made sure I was taking pictures. :) 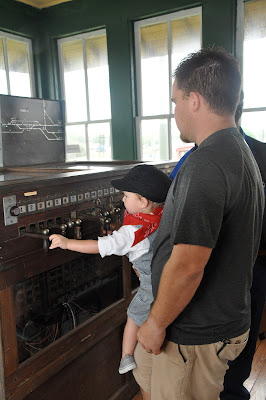 Here he's looking out over all the "train tacks." I (and I'm sure he) was really hoping a train would pass by while we were there. 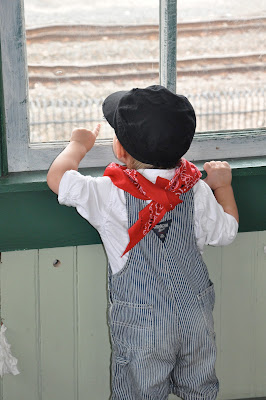 This is in a passenger train for "the rich," as our guide put it. It was much bigger than I thought. It had four rooms with beds, a sitting area, a small kitchen & a dining area. 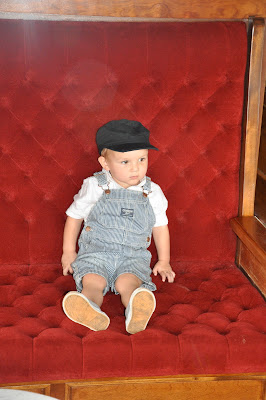 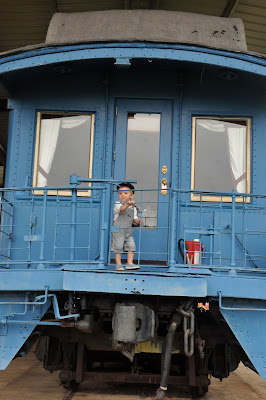 The museum has a few other random things, like this fire truck from the 40s, and a jail from the 1800s. 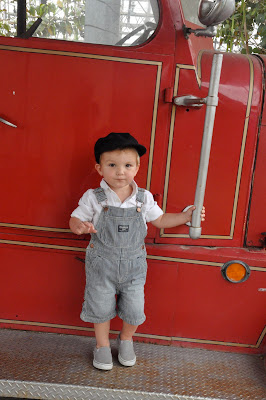 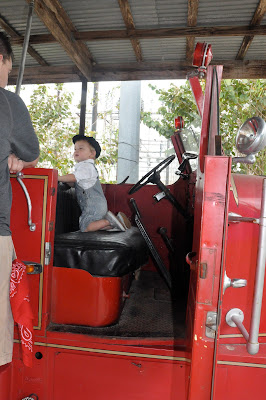 And when we walked into this room filled with a full set-up, K was in Heaven! He so wanted to grab all the trains as they went by, but he was so fascinated watching. Every time, and I mean every time, a train went by, he shouted train! And there were several trains in there! A man spent 30 years building this set. (you only see a small part of it here.) He did everything, including painting the backgrounds. He had no family, so when he died, his neighbors called the museum to come get it. 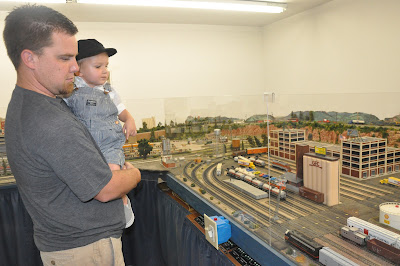 And this is our tired conductor as we're leaving. He didn't really want to leave, but he was so tired that he didn't put up too big of a fight! I think he had fun, and I think we'll be back again when he's a little older! 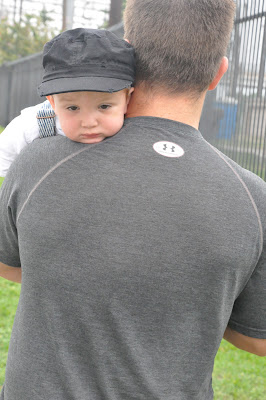 Posted by Micah and Nicole at 4:03 PM 4 comments

We've been playing outside a lot lately cause the weather has been so beautiful. And if there's anything our little guy loves, it's playing outside. So, often, in the afternoon/evenings...out we go! We do all things boy... 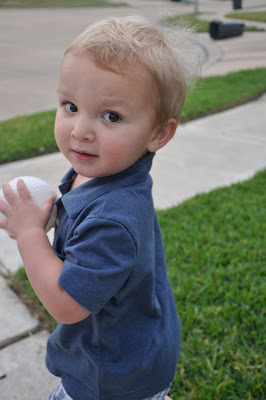 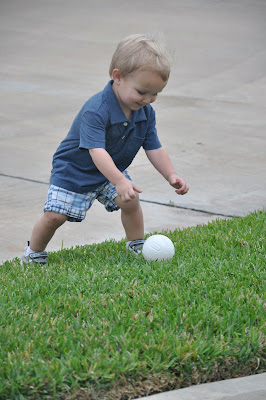 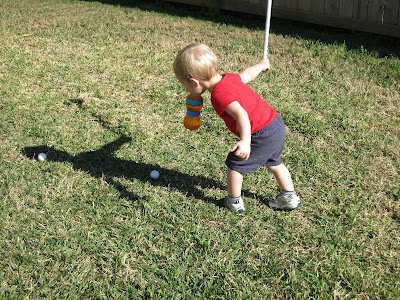 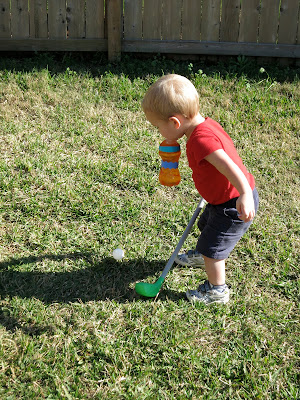 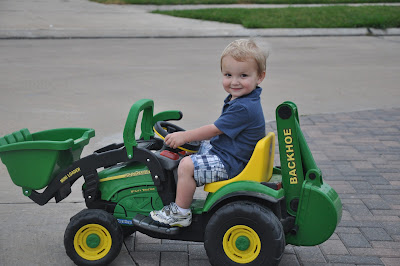 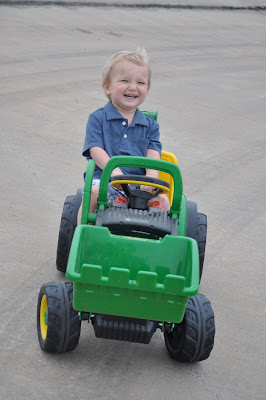 And play at the park! 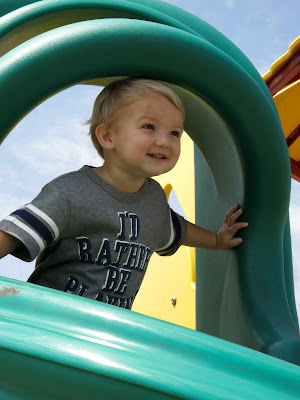 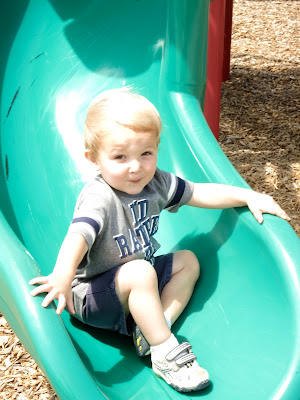 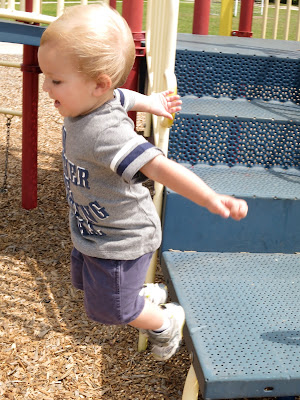 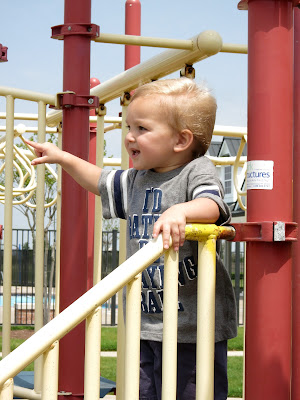 We love being outside, and we're loving how nice the weather has been lately! We're not looking forward to the extremely hot temperatures...except for the pool! :)

Posted by Micah and Nicole at 8:59 PM 1 comments