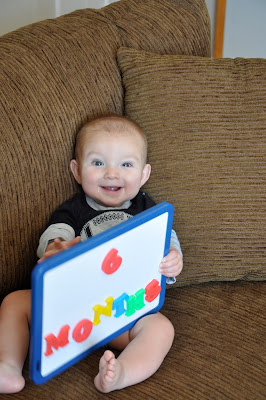 See that smile?? We get to live with it every day and we LOVE it!! We can not believe we're halfway through the first year. Has it really been that long already?!? We are so thankful for the past 6 months, and for the many more we'll get to enjoy!! 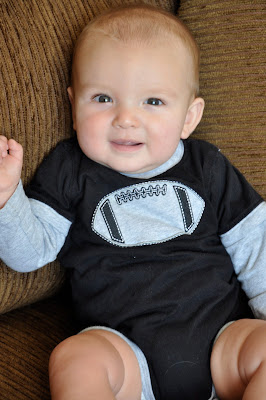 Stats:
I just took Kaden for his 6 month check-up. He was 16lbs, 10oz and 25.75 in long (25th percentile for both). Dr. said he's slowed in his growing, but he's doing just fine developing so there are no worries. Unfortunately, he has his first cold and ear ache, so he wasn't able to get his shots. We'll go back in 2 weeks to get those, as long as he's feeling well. 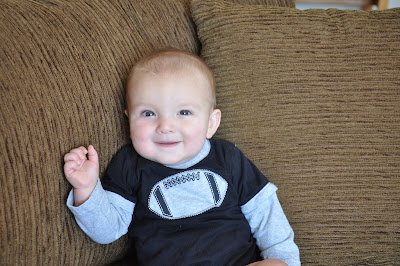 Sleeping Habits:
I fell like as soon as we take one step forward, we end up taking another backwards. We were just getting back on a good sleep schedule when Kaden came down with his cold. So now he wakes up several times a night. The majority of times, he wakes himself up coughing and I can just give him his paci to make him happy. Sometimes, however, he gets mad/upset and I have to rock or feed him. Hopefully once this cold is gone, we'll get back to a good sleep schedule...hopefully!! He is doing better with nap time during the day. He usually takes at least 3 45min-1hour long naps. If I'm lucky, they last longer than that! 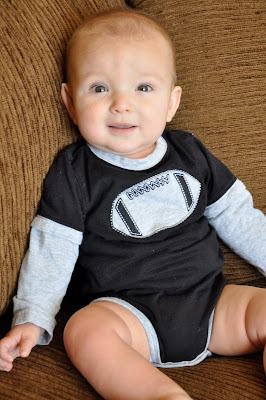 Eating Habits:
Kaden still loves to eat! This is the one area that has stayed consistent! I still nurse Kaden at all meals, and we're having fun exploring different foods. Baby foods we've tried include peas, green beans, carrots, sweet potatoes, squash, bananas, prunes, apples, and pears. We've also just started letting him sample foods off our plates. He loves mashed potatoes. If we're having something like carrots, potatoes, peas, etc. that I can smash up and share with him, I do. He loves to eat!!....he came by that honestly!! 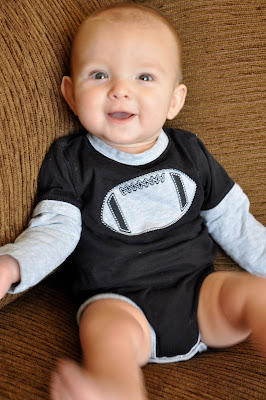 New Tricks:
Kaden just about has crawling mastered. He definitely has the "army crawl" mastered. I have to keep my eyes on him now, cause he is on the move. If his eye catches something and he wants it, he knows how to get there. It's so fun and exciting to watch him. He also can just about sit up on his own. Just today he sat up for a minute or so several times on his own. He's still wobbly, but he's definitely getting stronger. He'd start to lean, but he'd pull himself back up. It so exciting to watch the changes occur every day before our very eyes. 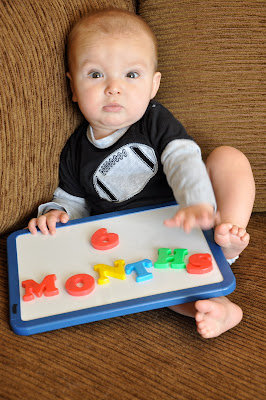 Dr. Visits:
We've been to the Dr. a couple times lately. I took him in last week because he had a really bad cough, and I wanted to make sure it didn't turn into something worse. I also wanted the Dr. to check his ears cause he'd been tugging at one. Dr said all looked fine, and Kaden was probably just coming down with his first cold. This week we went for his 6 month appt. He still had his nasty cough, and Dr. informed us he also had his first ear infection. We'll go back in 2 weeks for a check-up and his shots. After that, assuming all goes well, we'll go back at 9 months. 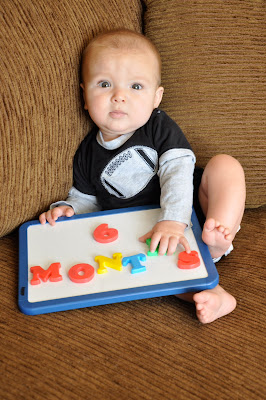 General Observations:
We're loving every day with our little guy. Now that he knows all these new tricks, he's becoming very independent. He doesn't like anything that confines him--car seat, bouncy seat, bumbo chair. He likes to be free and able to move. He's still quite the mamma's boy! He loves lights. Funny story: our rocking chair is located in a corner in our living room. Positioned directly about the rocking chair is the motion detector for our alarm system. He is so fascinated by that thing. I'm guessing it's because it blinks different color lights. I'm not sure, but it's almost got to the point where we can't sit in the chair for anything cause he's too distracted. If I'm trying to feed him or put him to sleep, he'll pop up multiple times to stare at the light. When we walk in that room from any other place in the house, he knows exactly where to look to see the light. He'll twist his whole body around to find it. It's the funniest thing. I'm really looking forward to the Christmas season because I know he's going to love all the lights everywhere! 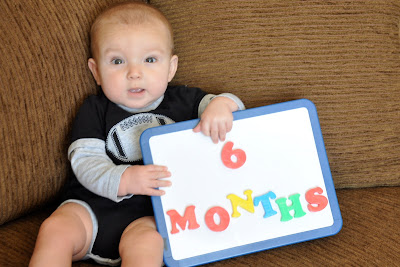 Happy Half Birthday Kaden!! We look forward to so many more!! 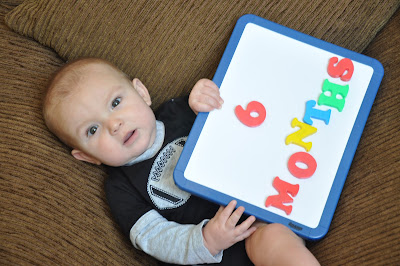 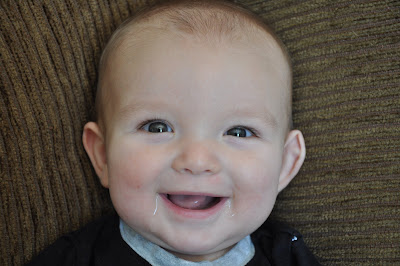 Notice the drool...that's just an accessory to all of our outfits these days! 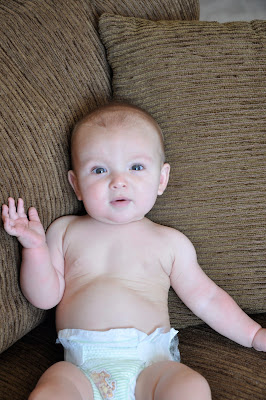 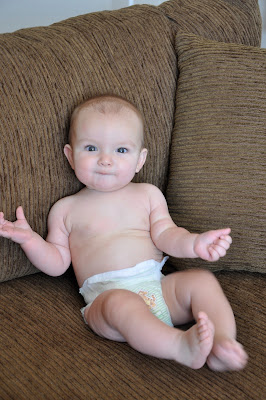 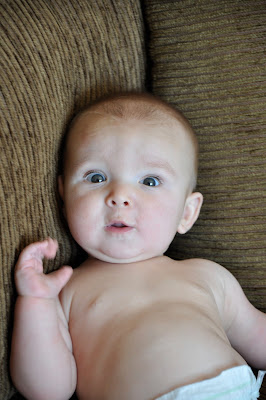 Posted by Micah and Nicole at 9:51 PM 0 comments

Last weekend, Micah's parents came in town to go to the Renaissance Festival. We met up with them for the day to join them. I think Kaden had a good time. Not that he'll remember any of it, but he enjoyed looking at all the sights. 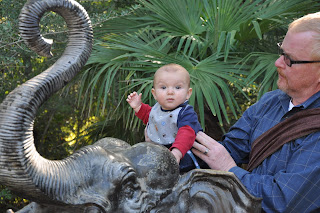 Sitting on the elephant. 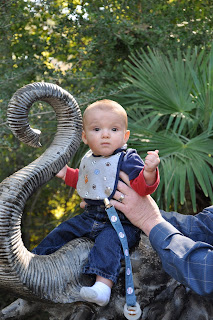 I think this is the only family picture we got while we were there. 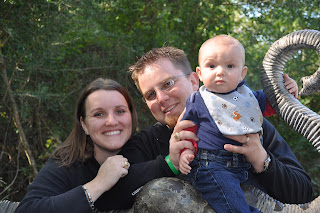 Bell player. I actually enjoyed listening to him. He reminded me of Phantom of the Opera. 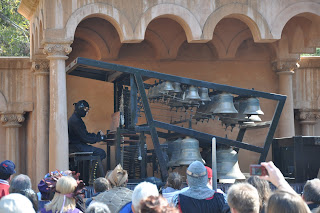 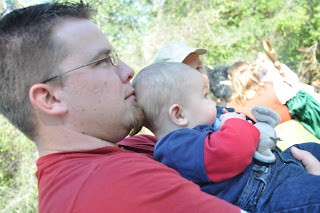 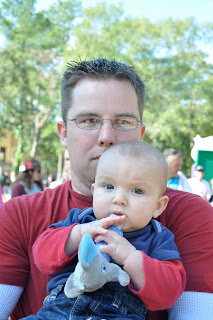 My little Renaissance baby. He rocked that hat!! 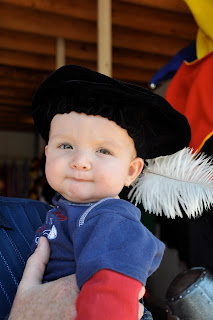